Back in December I picked up the 2012/2013 Lib Tech La Niña as my Burton Custom X had reached the end of its useful life (currently being re-born as a split board). I had done my research and some of the things that sold me where the combo rocker camber, low weight, ‘magne-traction’ edges, and of course the bad-ass storm Doppler graphic. I’ve torn up groomers at Wachusett, muscled through cement at Mt. Baker, scrapped along hard-pack at Whistler, floated on 2 feet of fluff in the Colorado San Juan’s, and can confidently say that the La Niña performed better than any board I’ve ridden in each scenario. 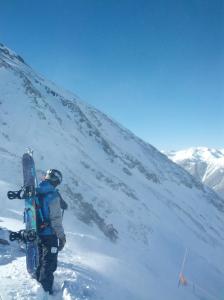 First the Camber. The board is shaped with a rocker in the front half, and a little bit of camber in the back. From what I could tell this camber in the back serves two purposes; first it gives you a ton more grip and carving ability than a complete rocker would for days where the snowpack is more firm, and second it accentuates the rocker in the nose when weight is put on the back foot. The result is a grippy, responsive ride on groomers/hardpack, and an awesome float on powder. I imagine a true rocker board would give you superior float on powder, but seeing as I don’t yet have the luxury of riding exclusively light pow I can accept some give in this area.  The La Niña also rode remarkably well in the wet, dense snow of the Pacific Northwest; plowing through the fresh and tanking over chopped up crud.

When I first purchased the board I wasn’t sure what to make of the wavy edge side-cut that Lib Tech refers to as ‘magne-traction.’  Its supposedly makes for more hold and power when carving although I couldn’t help but think of it as a gimmick. I was immediately impressed with the amount of edge hold the board had. This made riding non-pow days about as fun as they can possibly be. I am still unsure whether to credit the ‘magne-traction’ or simply the sidecut for the board’s superior edge hold, but I really don’t care; it rips.

In all the board has far surpassed my expectations. It really proved its worth in the crud and the pow. It should be mentioned that it is a directional board. I don’t really find myself riding switch that often so this never bothered me. When I did choose to ride switch, the directional camber of the board was noticeable, but not detrimental to the performance. I was not hitting jumps/kickers switch though so I cannot comment in that area.  Overall a great board highly recommended for any powder lover who splits their time in the deep stuff and on more firm conditions.