Welcome to our newest guest blogger, Aglades, who was kind enough to summarize the beginnings of one of our most recent ventures, rock climbing!

Easy E on the belay at Quincy Quarries 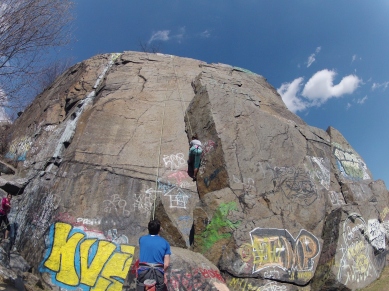 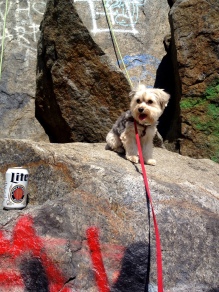 Looking down from atop layback

Powder skiers, I’m here to discuss an integral part of the YPGP lifestyle that has received little love on this here blog so far: rock climbing. As a group, we started rock climbing about a year ago, after the PMoose dabbled in some canyoneering in the San Rafael Swell. Since rock climbing was a hobby we had long coveted, but never pursued, we decided it was time to start. However, we were tasked with the arduous question, “where do a group of people living in the Boston Metro area begin to rock climb?” The answer came to us in two forms.

First, after some research and a couple of literary purchases (Boston rocks – like it was made for us!), we began climbing at nearby Quincy Quarries. This area just 20 minutes southeast of the city is an old granite quarry that’s been filled in and now exists as a recreational area for climbers (…and unfortunately graffiti artists). Given that many of the routes were within our beginner’s wheelhouse, we started our outdoor climbing here. However, we quickly realized that the time commitment necessary to set up routes for a group of six was too great to satisfy our newfound enthusiasm for the sport. We wanted to be on rock, all the time, without much hassle.

Then came Central Rock. It was by pure luck that one day PMoose ran by an old warehouse in Watertown and noticed it undergoing a miraculous transformation; this dirty, gray hollow was becoming the answer to our prayers. Eagerly we waited for the grand opening. (Perhaps a little too eagerly… a couple members of YPGP may have toured Central Rock two or three times the week prior to its opening…) As luck would have it, this neighborhood climbing gym happened to be one of the largest gyms to open in New England, boasting a climbing wall area of 28,000 square feet, and was the perfect remedy to our climbing bug.

Sure we may have climbed for two weeks straight after that. And we may have dragged in a number of close friends and family through monthly use of guest passes. Whatever the case may be, rock climbing has quickly become a favored activity year round.

And while the rock gym is there for non-powder days in the winter, the summer is alive with outdoor climbing possibilities across New England. I’ll be here to keep you posted on some of these vertical pursuits.